The first Friday in June is celebrated around the world as Donut day. But what is the significance behind this historical day?

Beginning in 1917, approximately 250 Salvation Army volunteers provided assistance during World War I to American soldiers in battle on the front lines in France.

Two Salvation Army officers, Ensign Margaret Sheldon and Adjutant Helen Purviance had an idea to comfort soldiers with good home cooking, using their limited ingredients to fry up in helmets delicious donuts for the boys.

Nicknamed ‘Doughnut Lassies’ and ‘Doughnut Girls’, these women served countless treats to grateful soldiers, traversing through the trenches to bring the men donuts and coffee. They also made history by introducing this tasty new treat to the United States when the ‘Doughboys’ returned from war. 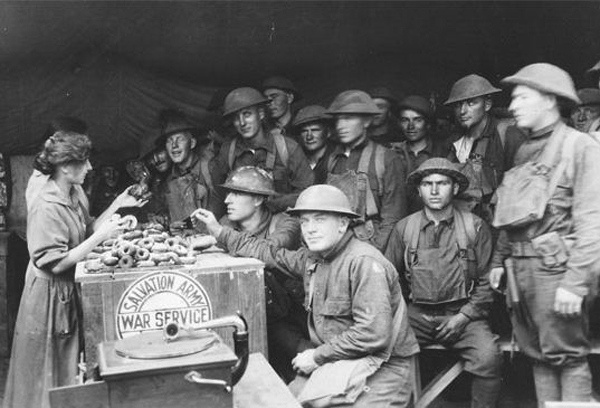 The celebration of this day still continues to be celebrated more than 80 years later to help raise awareness for The Salvation Army and to honour the service of veterans and volunteers alike.

So what better way to celebrate than with some yummy fresh hot cinnamon donuts you bake yourself!

Oh my, I can smell them already.  Fluffy and super delicious. It does take some time commitment, but it is so worth it.

For the Cinnamon Sugar

You’ve may have seen her in the kitchen before, rolling out donuts and putting together ceviche. But, this time it’s Jeni’s turn to really show off her culinary skills in  Jeni: Hometown Harvest. Jeni, joined by her close friends and family, is cooking up some of her favourite autumn foods like beef stew, chocolate chip cookies, and challah bread. But a season of Jeni wouldn’t be complete with out some fun activities like pumpkin carving, skeet shooting, and running through a corn maze. Come along as Jeni opens her doors and welcomes you into the family.

Encouragement for the Person Who’s Waiting on a Promise

3 Simple Strategies to Supercharge Your Attitude